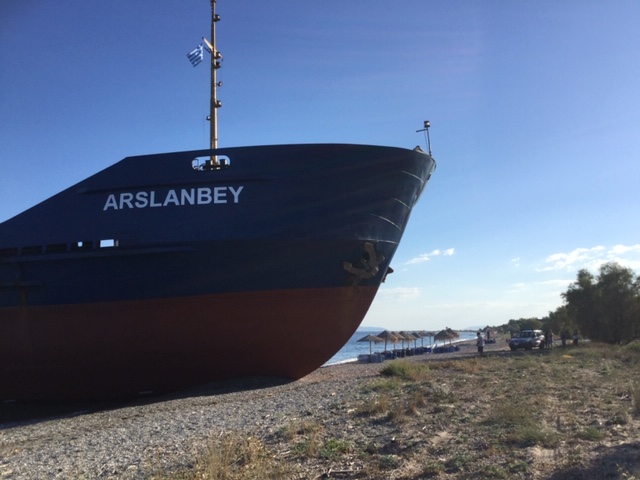 On summer we usually sit in the courtyard beneath the pergola,  with our guests until late  night, enjoying the coolness. The evening of September 4, 2018 was amazing . The phone rang and my neighbor announced that a ship was next to our umbrellas. I did not take it very seriously and I thought that a fishing boat would have some damage and caught the beach…

The reality drove me off, when I went  to the beach I saw a huge cargo ship  right next to our  beach umbrellas. The first reaction I laughed because I  grew up in Perama, a shipyard town,and I had seen a lot of big cargo ships nearby, but in Kanatadika?

It seemed like it was first time and it was. From the first evening neighbors with their kids went down to the beach and everyone was watching the spectacular sight and  that continued for the next two days. Everybody had a suggestion to use it, to do it … beach bar, hotel , an ark, a children’s playground, etc. The tv and radio channels were calling one after another  on our phones for an interview on the unique theme and we found an opportunity to advertise Kanatadika and northern Evia.

The good fortune was that on the third day the ship was away and we were lucky that it was not  injured but reached by a  wrong handling, and our beautiful crystal clear beach just felt as a… harbor for a little, and we traveled safely…