An acquaintance who changes your priorities

Kanatadika, a beautiful picturesque village by the sea, was named bacause of the pots workshops, existed in the area.

Traditional stone crafts have been preserved and turned into mansions. The 5 km long beach stretches in front of the village, form a beautiful picture with the crystal clear waters of Evia.

Traditional taverns and cafes complete this beautiful picture. A place blessed by nature and protected by the NATURA 2000 network.

Enjoy swimming and stay until sunset for a spectacular view.

Just 6 km from the eponymous town of Istiea, which even mentioned by Homer as “polystafylos Istiea” but its name is attributed to the fact that it supplied with upright trunks, Athenians, in ancient years, with which, they made sails for their boats.

The taverns, the coffee shops of the area always offer savory snacks accompanied by the traditional wine and oyzo. Be sure to try fresh fish and local meats and ask for local specialties, grilled sardines.

Do not forget visit:

Notre Dinius is a small chapel in North Evia in the forest, near Istiea, where a miraculous icon of the Virgin.
For the name there are two main versions: The first relates to the history of the icon of mother Mary, according to tradition, Turkish Ottoman soldier during the Ottoman period, shot the icon in an attempt to kill a Greek, who hunted, tried to hide behind the icon. According to tradition, the miraculous icon returned the bullet to the soldier and killed him. Distance: 10 min. by car.

The Hunting Club Istiaia, has assembled a large collection of 217 bird species and a sufficient number of mammals, reptiles, amphibians, insects, fish, rocks, minerals, shells, etc. The number of visitors from all departments of the country and abroad over 10,000 excluding school students. To Natural History Museum, currently has the largest collection of birds in Greece (191 species of Greek fauna), wishes to enrich the collection and other exhibits, especially with rocks and minerals.
Distance: 10 min. by car. 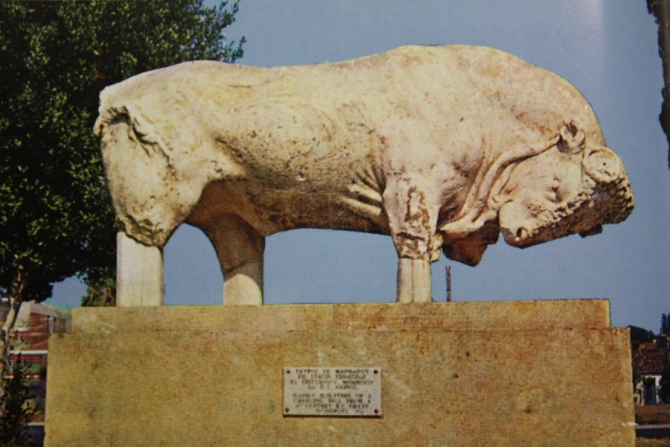 Super bulky sculpture, now exhibited guarded in a glass cabinet behind the temple of the Saviour, near the port of Oreos, was found in August 1965 buried on the beach. It belongs to the Hellenistic era, and has a length of 3.2 meters. It was a gift from ancient Athenians to the people of Istiea. The weight of the relief, which is made of Thracian marble, exceeding six tones. Distance:10 min. by car.

On a hill above the Oreos, in northern Evia, are the ruins of the castle of Oreos. According to legend, the hill is artificial, where thousands of people for years carrying soil. They had left two underground secret entrances to the castle, impossible to find from their enemy. Even they, could not find them, during the night. Distance: 10min. by car. 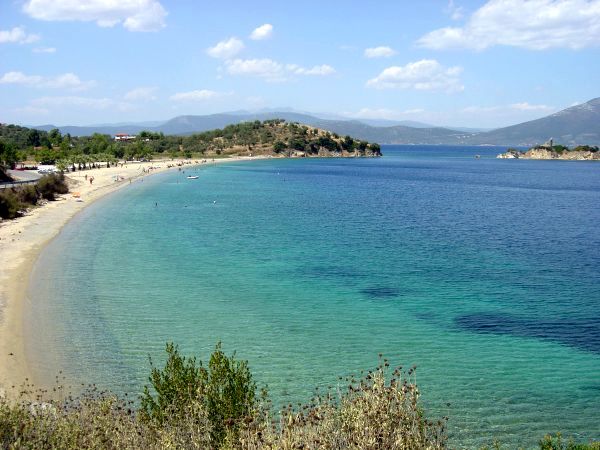 Just outside village N.Pirgos there is a beautiful natural beach called Nisiotissa. 200meters from the beach there is a Small island (islet) with some ruins on top. These ruins of a church that was made the Frankish period and the remains of a tower that was built in the period of Othomanokratia. Distance: 15min. by car.

One of the most important archaeological sites in Evia island. Located on the beach of Edipsos baths. These findings, which have come to light in this area are numerous and important. They belong to the oldest Neolithic period (6th thousand bc) and in subsequent periods. Distance 20min. by car. 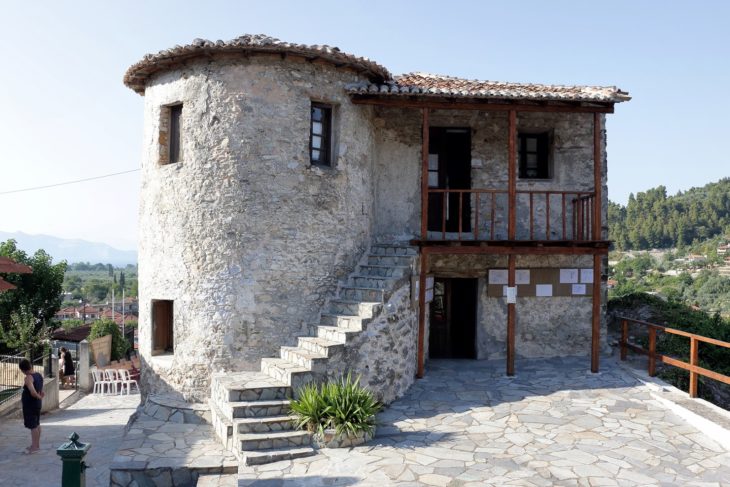 This is the famous tower of Gouves, which later became property of the poet Drosini. Here the poet lived for a long period of his life, and wrote some of his well-known poems. The house dates after 1800, and was constructed by Ibrahim Aga. The architectural designs were made by a slave, named Ahmed, said that, in return, Ibrahim Agha gave him his freedom. Distance 20min. by car.

The Museum Fossil Mammal of Kerassia village, launched in September 2006 and houses the paleontological wealth of the region. Excavations in Kerassia village, have found fossils of mammals, that lived in Evia more than six million years ago. These finds, suitably preserved by the University of Athens, presented for the first time in public in an original way. Distance 35min. by car. 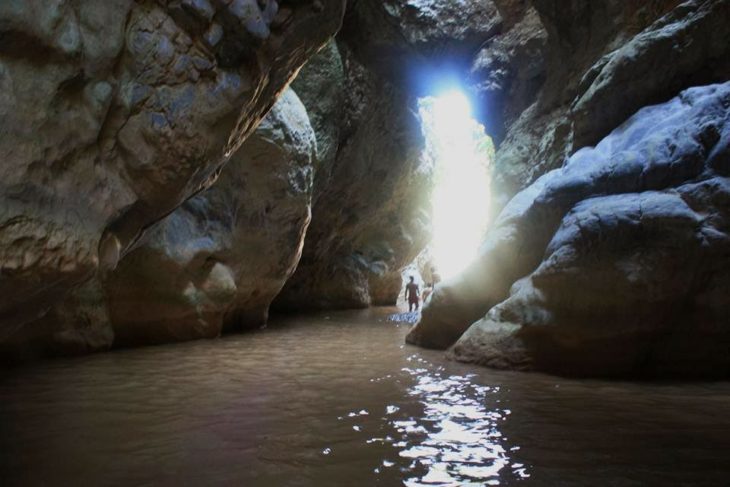 Outside the village Agia Anna, 3 km west in a mountainous area is a famous canyon gorge Boulovinainas. The story says that during the revolution of 1821 Boulovinaina wanting to avoid the Turks, fell into it, and then took its name. It is called, during the Ottoman period, around 40 people, were hiding from the Turks in a cave in the gorge, among them the Bolovinaina. For some reason, the Bolovinaina came out of the canyon, and as turning, found the Turks. To avoid falling into their hands, and not to betray the hiding place, the Bolovinaina fell into the gorge. Inside the canyon flows the river Nileas, which has its source on Mount Dry. The gorge is only 3 km from Agia Anna and visitor arrives through the Palaiovrysis settlement.

The gorge also called Nigger. This name probably comes from the ancient legend which said, that sheep drank water from the banks of Neleus, gave birth black sheep. For those who want the summer they can walk through the gorge and enjoy its beauty. Distance 45min. by car.

The waterfalls, compose a location inexhaustible natural beauty. The beautiful waterfalls are located in Evia island, at an altitude of 620 meters, 4 km after the Monastery of Saint David, the road starts from Rovies or Istiea. The path between the environment full of vegetation, offers peace and quiet feeling to the travelers. Distance 40min by car. 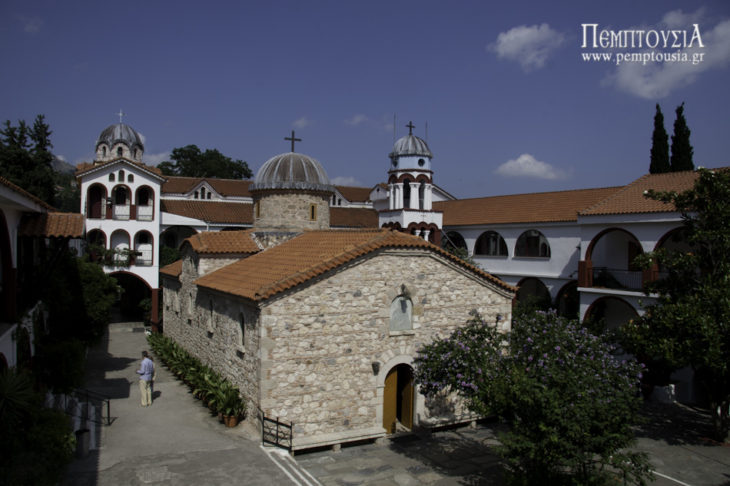 In low mountain Xiron, opposite the village Drymona is built the monastery of Saint David. The location that is sheltered from all winds. The year of the first building of the monastery is not precisely known. What is certain is that it existed before 1500, since the Saint David (who lived circa 1550) established the monastery on the ruins of an existing temple. At the temple of the monastery kept in the reliquary Artist fragrant and miraculous bones of Saint David the Elder, as the censer and stole of the saint, of Russian origin. Also preserved manuscript daneistirio of Angeli Gobios, who come from Pelion passed from the monastery and borrowed 1,000 piastres for the needs of the race 1821. In this daneistirio the Evia General thanks the fathers of the monastery and the people for their contribution to the struggle for freedom.

In recent decades the monastery became known nationwide for Divine abilities of a charismatic monk, who lived there for many years, until the end of his life he was the abbot of it.

The location to which is actually fascinating as it is constructed in plateau, located 200 meters above sea level thus having a magnificent view to the Evian golf and the coast of opposite situated Viotia. The monastery dedicated to St. Nicholas (sea protector, and replaced somehow, Neptune). This justifies, the incised vessels, dedicated passing captains, over the centuries. According to the prevailing version of the name, “Galataki” probably originates from the first, after the 10th century founder, who was a master come from the Galata Istanbul (will most likely called Galataki). It is said, therefore, that this captain threatened to run aground in the waters of the area, and saved after the divine intervention of the saint, the church which stood there and its existence was known to the master. The captain after rescuing, visited the ruined monastery, he decided to rebuild the monastery. The decision was realized, some time later he lived the rest of his life as a monk in the monastery. On another version, the name comes from the many herds and productivity of dairy animals that once existed in the area.

From the chapel there is a secret passage that leads to the roof of the church, which served as a refuge, for monks in Muslim persecution. The church, which is built in the typical Athos, according to legend was built in 1576.